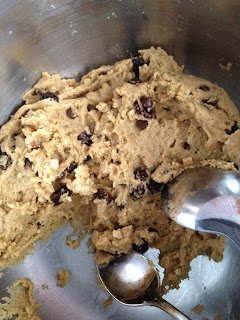 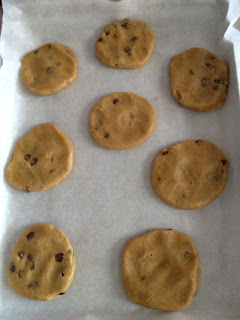 roll into ball and flatten 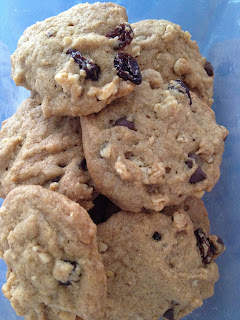 tis are using teaspoonful drops
Hubby was asking for home-baked cookies, saying that I didn't replenish the 'stock'.. Took the chance to disturb him for complaining about the unhealthy snacks due to the amount of sugar used. LOL.. So fun to 'argue' in a healthy way sometimes..Anyway, this time I wanted to try another recipe from Crissie Lee in MFWL. And a shifu from MFWL added cinnamon to it. The cinnamon really makes the smell from baking them so familiar. I feel like I am walking pass a Amos shop. The taste is not really 100% there but at least there is about 80%. Whatever the taste is, it is still great if you don't compare it to the famous brand.It was a last min decision since the topic of 'replenishing' came up during lunch and being a DUTIFUL Wife, I had to fulfill my hubby's request. I substitute it with purely Brown Sugar instead of a half-half combi if brown and white. The 'Famous' Cookie recipe (from dequeenkitchen modified, originate from Crissie Lee)255g Plain Flour70g Caster Sugar *chg to brown sugar70g Brown Sugar1 Egg1/2tsp Baking Soda1/2tsp Vanilla Essence1tsp Cinnamon Powder113g ButterChocolate Chips, Raisins and Nuts to add based on your preference
Cream butter and sugarAdd egg and vanilla essenceAdd flour, sugar, cinnamon powder and baking sodaMix well, add in the above chips etcPut a tablespoon of coke dough with space allowing them to expand while bakingBake for 20-25mins at 160-170deg.