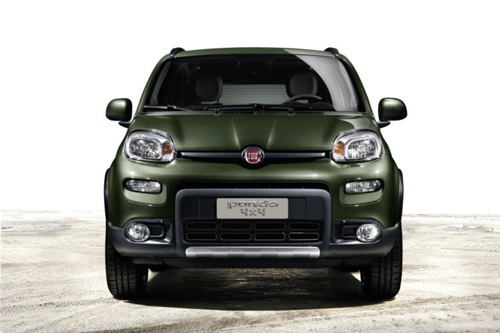 The new Fiat Panda 4x4 celebrates on the Paris Motor Show debut.Fiat continues the tradition and aim to provide the third-generation Panda again with all-wheel drive. Premiere of the Panda 4x4 at the Motor Show in Paris (27.9 -. 14/10/2012). He is the only SUV in its segment.

The Panda 4x4 has a permanent four-wheel drive, which is controlled by an electronic control unit evaluates vehicle signals corresponding to the grip and the driving force evenly distributed proportionally to the front and rear axle. The system is equipped with a gearbox with two differentials, and an electronically controlled coupling.

The Panda 4x4 comes standard with an electronic stability program with electronic limited slip differential. This system offers more support while driving and when starting on slippery surfaces (snow, ice, mud, etc.). The limited slip differential works with braking to the wheels, which the liability or lose more than the other slide. Thus the driving force is transmitted to those wheels which have higher values ​​Grip. This function can be activated manually via a switch behind the gear lever and at speeds below 50 km / h effective.

Are also presented in Paris, the two new models Panda "trekking" and "Natural Power". The first is a combination of 4x2 version with 4x4 optical system in which the front wheel drive on the "Traction +" technology of the group has. It improves the handling of the vehicle on slippery surfaces and optimized starting. The term "Natural Power" lies at Fiat, in this case the natural gas version. She is in the Panda with the two-cylinder Twinair and equipped 59 kW / 80 PS.