Ah, it happened again.  Just when I said "I have no time to post," I got the urge to post!

So, Brendan over at Untimately wrote a very cool summary of the minimalist rules behind the very oldest version of D&D.  (What I would give to have played in those early, seat-of-the-pants campaigns on picturesque Lake Geneva...)  I knew a lot of the details, but the bit about reaction rolls caught my eye:

Monster reaction:  (roll 2d6):  2-5: negative, 6-8: uncertain, 9-12: positive
For those who don't partake of the RPG drug, reaction rolls are just something the GM does, usually in secret, to more quickly figure out how a foe (or just a random person on the street) acts in response to meeting the player characters.  Some GMs don't like to rely on randomness for this, but for many it seems to help move things along and avoid decision panic.

Back in the 1980s, I never used reaction rolls.  Monsters usually attacked, and humans usually didn't do anything until provoked.  Exceptions were "plot driven" (cough... railroad... cough).  But as I've been developing Homebrew '82, I realized that there were many more possible options that could lead to fun, emergent role-playing, and the reaction roll table seems to be a good place to put them as a memory aid.

So, I set about making tables.  Lots of tables.  The OSR crowd provided many examples, too (thanks JDJarvis and Jeff and Roger).  I kept the classic 2d6 roll, modified by charisma, but I made separate tables for intelligent human-like foes (who could be sneaky) versus non-intelligent animals or monsters (who spook easily).  I also had separate tables for attempts to hire henchmen, and for attempts to be apprenticed to (hired by?) a mentor when training for one's next experience level.

After seeing the one-liner above from the little brown books, I think it was too many tables!  :-)

Anyway, some or all of them may disappear or be greatly simplified when I get to the GM's book (volume 2 of HB82).   However, this blog is the perfect place to enshrine the extent of overly complex, baroque filigree that I'm capable of reaching when left to my own devices... 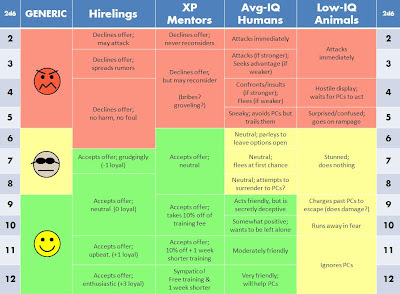 Click for Brobdingnagian nuttinessThe first column contains the Spartan simplicity of 1974.  The others are the 4 situations I mentioned above.  I still think there are some interesting "reactions" in there that I know I'd never remember to trot out if I wasn't using a table like this.  But I know I've got to pare it down somehow!