Randy Bernard has moved from his position as CEO of the IndyCar Series. Jeff Belskus initially assumes his duties. 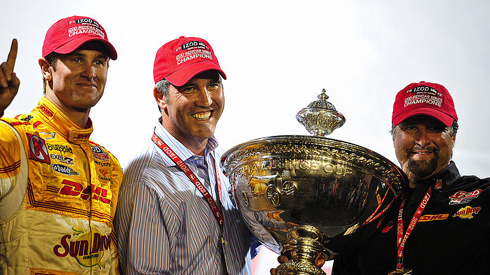 Randy Bernard (center) steps down as CEO of the IndyCar Series

After a specially convened meeting of the Board of the Indianapolis Motor Speedway Corporation on Sunday it was announced that Randy Bernard travels from his position as CEO of the IndyCar Series, with immediate effect. In his place, for the time being the Indianapolis Motor Speedway Corporation President and CEO Jeff Belskus act as CEO, the racing series. Bernard the IndyCar Series will be retained as a consultant.

"We are for the tireless efforts of Randy very grateful that he has invested in learning, understanding and growth of the IndyCar Series for the past three racing seasons," said Belskus. "Revue After both Randy and the organization have the past season can and look at the challenges we possibilities were addressed and how able they are best, we have agreed that the timing was right to go their separate ways."

Bernard himself said: "I enjoyed the opportunity to work with the entire IndyCar community, the teams, drivers, partners and loyal fans, the past three years were exciting and sometimes difficult times, but we have created a basis for IndyCar.. from which they can grow over the years and I am proud of what everyone has achieved in IndyCar, since I came on board. "