April is almost here!  I've been having a blast preparing my April A-Z posts on all manner of Signs, Symbols, Glyphs, Codes, and Sigils.  I can't guarantee that I won't run out of steam before the end of the month, but I can verify that I do have a rough outline for each day's post already "in the can."  So the posts may grow shorter as the month wears on, but hopefully not by too much.  :-)

For each day's post, I'll be presenting one specific symbol.  In addition to some fun facts about its origin, I'll try to find some kind of way to apply the central idea to old-school role-playing games.  Again, I make no guarantees... there will likely be a few that I throw in just because I thought they were cool.  And a few that I use merely as a jumping-off point for other musings...

As a teaser, here's a preview of all 26 symbols, in a Where's Waldo kind of jumbled format.  A mighty marvel no-prize to any reader who successfully predicts any day's letter-themed title from this! 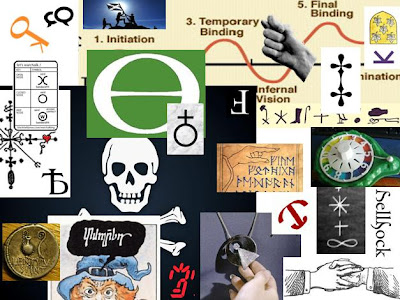