If and when I ever get back to running a long-term RPG campaign, one thing that I'd really like to get right is the simulation of a complex and interesting world.  A world that doesn't just exist as a series of disconnected "adventure hooks" for the players, but one that breathes and evolves on its own as the PCs interact with it.

There's tons of advice out there for building such a vibrant SANDBOX world (see, for example, tips from noisms or Rob Conley or ckutalik), and last year I tried my hand at beginning to work out my own (see posts 13 thru 18 here).  For me, the problem isn't laying out all the ideas on paper -- that's just a matter having available prep time.  It's the thought of actually "running" it, in real time at the table, that scares the bejeebus out of me.  What I really need is some kind of unifying system for keeping track of it all, parceling out the information with dramatic tension, and not introducing too much to the players too early.

Recently, though, Black Vulmea has been posting some fascinating takes on chance encounters (especially details about a cool scenario generator from a game called Robots & Rapiers) and those posts have got me thinking... 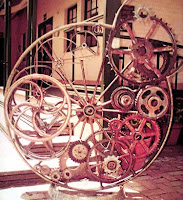 By "properly done," I'm thinking nesting.  Wheels within wheels in a spiral array, baby. :-)  Below is version 1.0 of a possible master campaign event table.  Each potential result will likely spawn more die rolling on other tables or on-the-spot choices to be made by the GM.  The key is that these choices not be too open-ended, but ratcheted down by the previous die-roll results and the present situation.  The top-level table must be simple enough to be memorized.

Every day that the PCs are out in the world (wilderness, city, whatever... but not a specialized closed environment like a castle or a dungeon), roll 1d12:

Seems simple, but there's a lot packed in there.  Here's more about each type of event:
Nothing unusual:  Of course, the GM should still roll to figure out what the weather will be, keep track of PC rest and rations, and so on. Do the PCs need to hunt or forage for food?  Do they need to go to a market or take care of their horses?  Some people may not be fond of all that day-to-day record keeping, but I think it keeps this whole enterprise from devolving into a video game stuck on the "Easy" setting. Intra-party event:  By these, I mean things like checking NPC morale to see if any henchman run away, or seeing if anyone comes down with a case of trench foot, accidentally tips over a beehive, or has their saddle-bag straps break when they're trotting over some deep mud puddles. Maybe a cleric character has a prophetic dream?  Or a bard-acrobat accidentally injures himself when practicing his juggling?  If the GM rolls on a sub-table, I suggest crossing off an event once it happens, to avoid repeats.Location-based event:  Each "hex" on the campaign world-map should have its own local "wandering monster" type table that's appropriate for that location.  No jaguars in the tundra, please.  These days, I'm more apt to keep kooky monsters as a very rare and special thing, and populate these lists with more of a panoply of human and animal variety.  There's ample room for the weird and gonzo without needing to dip into the bestiaries of Tolkien, or the ancient Greeks, all the time.Random adventure hook:  I may have talked them down at the top of this post, but in moderation they can add some spice.  These events can happen pretty much anywhere and can be the start of something the players will latch onto as a goal.  The Robots & Rapiers generator linked above had several tables worth of possible "scenario introductions," and there are many other suggestions for "adventure starters" out there.  I'm also thinking about including my ideas for unorthodox rumor delivery in this category, too.Large-scale plot event:  Ah, here's the home of the grandest designs of the GM.  The mythic over-arching narrative arc.  Maybe some don't think that a sandbox campaign is the place for something like this, but if used sparingly, it can transform a series of unconnected events into an epic.  If one is running a feaux-medieval fantasy world (without cellphones and global networks), then these big plot "events" should be location-based, too.  Each kingdom has its own grand intrigue.  A plague of zombies or vampires starts at a given ground-zero and spreads at a given rate.  GMs should have a big map with big swaths of area circumscribed for these kinds of major events.  Maybe the PCs could be lucky enough to travel all the way through one of these regions without interacting with the big event, but with a 1 in 12 chance per day, who knows what will happen?Other details:

If any event happens, the GM can also roll to find out what time of day it happens.  Of course, many of these rolls can and should be done either in advance, or at the subtle tap of a laptop key, to help maintain the illusion that everything is happening according to God's own plan.  :-)

Also, I'm sure that I'm not the first to have the idea to base both "local" and "global" events on a unified set of nested random tables.  I'll bet someone has done something similar with grand-campaign type games like Pendragon or World of Darkness.  This is just my own take on these archetypes of the RPG collective hive-mind....