The 10th Regeneration Of Christmas

The Tenth Doctor was portrayed by David Tennant from 2005 to 2010 -- the longest stint since Tom Baker's in the 1970s, I think.  My family and I recently finished watching all of his adventures, and I've got to rank him as my favorite Doctor so far. 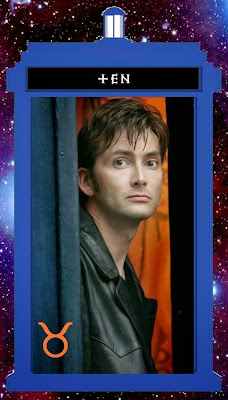 Despite just having watched all of his episodes, it's a bit difficult of me to sum up the Tenth Doctor's personality in a few sentences.  It doesn't help that his physical characteristics and conceits are an amalgam of (or conscious homage to?) Doctors 1 through 8.  Tennant showed huge emotional range and depth.  I suppose that I agree with Wikipedia's assessment that "the Tenth Doctor generally displays a light-hearted, talkative, easy-going, witty, and cheeky manner, but nurses profound anger, regret, and vulnerability beneath his more glib exterior."  However, I also think the upbeat notes outnumber the downers.

"Mankind doesn't need warfare and bloodshed to prove itself. Everyday life can provide honour and valour. Let's hope that from now on this country can find its heroes in smaller places. In the most ordinary of deeds."

"Look at these people, these human beings. Consider their potential! From the day they arrive on the planet, blinking, step into the sun, there is more to see than can ever be seen, more to do than -- no, hold on. Sorry, that's The Lion King. But the point still stands. Leave them alone!"

The Tenth Doctor is supposedly a TAURUS.  However, this is the one case in which I don't see a good match.  Tauri are traditionally all about security, patience, persistence, and a love of material things.  Much more Bilbo Baggins than the Doctor, I'm afraid.  Although I could cherry-pick a few Taurus terms such as reliability and warm-heartedness, the whole picture just doesn't seem to fit this time.  In Dawn Ellis' original description of this Zodiacal/Doctor theory, she said simply that "David Tennant is the best kind of Taurus that ever lived."  I'll leave it to those more well-versed in astrological personality types to judge.

The New Year's Resolution for our stereotypical stability-loving Taurus is to keep moving and changing.  Having staying power is great, but sometimes that can lead to stagnancy or the frustration of being stuck in the mud.  Similarly to the sign characteristics, though, I'm not sure if it's a good fit here.  I don't think any incarnation of the Doctor has ever needed someone to tell him that he needs to keep moving and changing!

(Well... there was that one time that the Tenth Doctor needed to hide out from evil mind-readers, so he gave himself amnesia and became a, well, pretty typical Taurus human schoolteacher.  It took some serious prodding to get him to put that calm, settled life aside when it came time to remember who he was!  Okay, maybe there's something to the Taurus thing after all...)

[See the introduction for more about sources and motivations for this series of posts.]